Prepare for the DELF B2″ 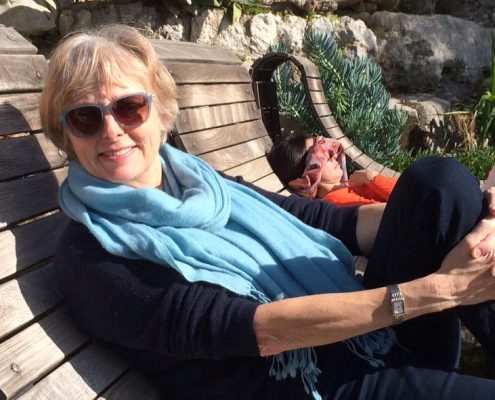 I recently spent a fantastic week with Genevieve in Nice. My level of french is Advanced and my aim was to prepare for the DELF B2 exam while, of course, speaking as much french as possible. Both these aims were amply fulfilled by Gevevieve with great good humour and attention to detail. The mornings started with chat over breakfast followed by an exploration of current affairs in France and elsewhere using an excellent website which I have continued to use in the UK. This was followed by grammar exercises and explanations which were really helpful in finding the “holes” in my grammar knowledge. Genevieve has a very flexible approach so that when a difficulty is encountered she quickly produces exercises on the topic to ensure that the point has been understood.

Lunch was taken in a restaurant with her twice during the week and followed by 2 outings – both of which were fascinating. The first to Eze, a beautiful hill village with amazing sea views with obligatory visit to chez Fragonard for some retail therapy! The second was an informative walking tour of Nice including the Castle?? at the top, again with great views. The apartment is very centrally situated in Nice – 5 minutes walk to a delightful old fashioned French cinema and a further 5 minutes walk to the sea with both the new and old town very close by. I was free to use her very comfortable apartment during the day if I wished for extra study etc. We then met up again for supper in her apartment – always delicious – followed by television and conversation until bedtime.

I found the whole experience not only very beneficial to my French but also hugely enjoyable. Genevieve is a very patient, amusing and experienced teacher of French and I certainly plan to return next year.

Speaking French throughout the day
Scroll to top